SALT LAKE. Local teen-agers call the Great Salt Lake “the wannabe ocean.” Their parents grouse that its waters reek of rotting brine shrimp. And state officials, who otherwise ooh and aah over Utah’s ski trails and copper canyons, treat the lake like an unwelcome relative.”There’s nothing ‘Great’ about it,” said Representative Karen Shepherd, the Democrat who 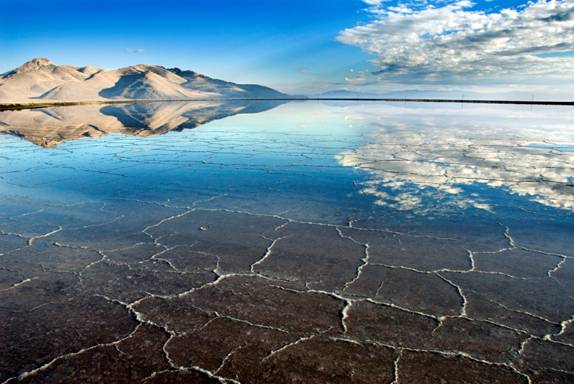 represents Salt Lake City in Congress and who is otherwise an avid booster of her state. “In August, you can’t get near it because it has an odor that smells so bad.”

The Salt Lake Tribune expressed regret last year that the lake was “not the sort of place that makes a good impression on tourists.”

At first blush, the general disrespect accorded to the largest salt-water lake in the Western Hemisphere seems curious.

From most vantage points, the lake is an impressive sight, bordered by rugged snow-capped mountains that reflect majestically off its water. Its wetlands and stark islands harbor an exquisite array of wildlife, like bison, bobcats and black-bellied plovers. Its mysteries have fascinated the likes of Mark Twain and Kit Carson, and its unpredictable cycles of flooding and shrinking have inspired others.

The “sand” on the lake’s beaches consists of pellets of hardened excrement of brine shrimp, which live in the lake and die off in the cold winter water. Swarms of brine flies blanket the muddy shoreline, attracting two million to five million migrating birds a year from as far away as Tierra del Fuego. But, boy, do those flies have an odor.

The only time the lake does not stink is when it floods, which is every few years. But when the lake relieves the nose, it robs the wallet.

You can’t do anything about the smell when the wind goes in the wrong direction!